Sir Muhammad Iqbal was a Muslim poet, philosopher and politician who was born around 1877.

He was most popularly known as Allama Iqbal, and is credited with being the spiritual father of Pakistan. His works on poetry, philosophy and politics were compiled in Urdu, Persian and English. Allama Iqbal was also an academic, scholar and a barrister.

Although he is revered the most in Pakistan, Iqbal is admired across the globe by both Muslims and non-Muslims alike, and was highly regarded as a “Muslim thinker of modern times”. He was not only well versed in Urdu and Persian, but was also one of the very rare Muslims to walk amongst the western philosophical giants of his time and hold his own in English.

Allama Iqbal became known as the Philosopher Poet due to his unrivalled gift of combining superb poetry with soul-awakening philosophy. His poems cast a spell on readers/listeners alike, whilst the ideas inspired a call to action.Iqbal’s philosophy is centred around the concept of ‘Khudi’ which is commonly translated as the ‘Self’, and can be best explained by his famous couplet:

“Elevate the Self to such an extent that before issuing a decree of destiny, God himself asks man: What is your desire?”

The message Iqbal was essentially trying to convey was that every individual should strive to work on developing and realising the Individual Self through discipline, hard work and one’s actions in life, and understanding his relationship with God. Once the realisation of the Self has taken place and the spiritual journey has progressed, man can then explore the true extent of his power and understand his real purpose in this life and the next, as well as his communion with God.

Iqbal was seen as such a visionary that it led Professor Arnold to remark: “Iqbal is a man of his age. He is a man ahead of his age and he is a man at war with his age.” 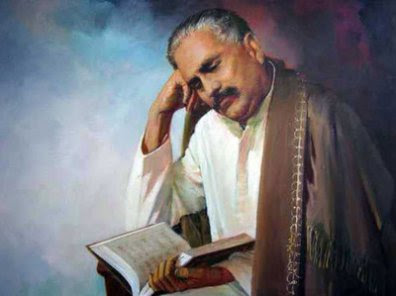 Iqbal’s poetry and philosophy was also linked to his work as the politician. At the time, Iqbal was a Muslim living in India. Muslims were a minority compared to the majority Hindu rule.

Iqbal felt that Muslims were not being treated equally, and that their Islamic identity would be lost if things were to continue as they were.  It was then, at the Allahabad Address in 1930, that Iqbal called for an independent state for the Muslim-majority provinces of India.

This was the starting point to what eventually led to the creation of Pakistan in 1947, and is why Iqbal is labelled the spiritual father of Pakistan despite not being alive when Pakistan was created.

There are many different elements about Allama Iqbal, and going forward we intend to explore some of the pertinent ones. For now we would be happy to hear your views on Iqbal: were you aware of his existence; what influence has he had on you or anyone you know; is there any particular aspect you’d like to discuss? Feel free to drop any comments you may have.