The Poetry by Allama Iqbal

It’s majestic. It’s magic. It’s mesmerising. Very few words can do justice in describing the poetry by Allama Iqbal. It’s not just the mastery of the language in which the poems are written, it’s also the visionary concepts that are contained within them.

To generate the kind of passion that kick-starts a movement for freedom and independence which results in the re-shaping of the world map testifies to the genius of Iqbal’s poetry. Many an artist has come along producing work that accumulates deserved accolades, but only a unique few can ignite a fire within the soul of men to such an extent that it inspires them to take revolutionary action like Iqbal did.

One of the magical attributes of Iqbal was that despite his native language being Urdu, many of his poems were actually in Persian. One estimate states that he had written 12,000 verses of poetry, with 7000 of them being in Persian. The poems were equally beguiling whatever language was used.

Although no poems were produced in English, Iqbal also developed strong mastery of the English language. It was in English that he produced his philosophical magnus opus: The Reconstruction of Religious Thought in Islam, which is outside the scope of this article.

There are so many works and poems of Iqbal, each filled with their own wonders that one article just would not be able to cover them all. With a such a vast array of poetic richness, it is no wonder he was given the title ‘Shair-e-Mashriq’ (Poet of the East).

We will therefore only look at a couple here, with a brief overview of the main points.

Shikwa was one of Iqbal’s earliest iconic poems and one that was daring to say the least. The word translates as ‘Complaint’ and is a narration of a complaint to God on behalf of man.

As would be expected with such an undertaking, Iqbal came under intense criticism and controversy from orthodox Muslims at the time, being around 1909.

The complaint on behalf of Muslims to God that Iqbal makes is based upon describing all the things that Muslims did in the past for the sake of God, yet now God neglects the Muslims in the present age given the state they are in.

Jawab-e-Shikwa (The Reply to the Complaint)

The Jawab-e-Shikwa, which translates as and is, the ‘Reply to the Complaint’ was written by Iqbal a few years later in 1913. In the poetic sense, this was God’s reply to the complaint made in the earlier poem. However, it must be remembered that of course this was actually Iqbal’s own reply to his own complaint.

The poems together serve as a wake-up call for the Muslim community. From a historical point of view, it must be remembered that during Islam’s Golden Age, Muslims were at the forefront of science, education, art, philosophy and the pursuit of knowledge.

Significant Muslim achievements were made during this period, which Iqbal recounts in the Shikwa. The complaint therefore is essentially about why God has neglected the Muslims from taking them from that glorious past to the plight that Muslims find themselves in the present. 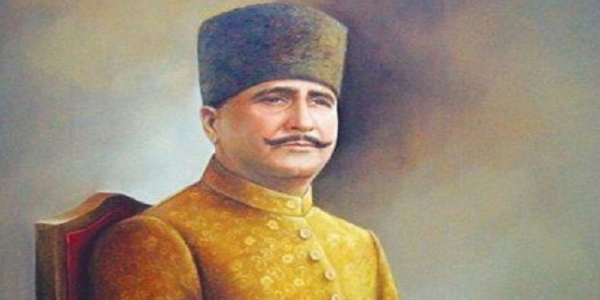 The Jawab-e-Shikwa responds by highlighting the difference in character and behaviour of the Muslims of the past compared to the Muslims of the present. The poem, however, isn’t just a response to the complaint, it actually provides positive advice and a solution to the problems the modern Muslim faces.

The last verses finish with God telling man to use intellect as his shield, and love as his sword. There is also a reminder to stay faithful to the message of the Quran and the Prophet Muhammad, and with that intent man can shape his destiny.

The Asrar-e-Khudi (1915), which has been translated as ‘The Secrets of the Self’ is where Iqbal developed the first part of his theory of the individual in society. The main theme of this poem was the ‘Khudi’ which is commonly referred to as the Self, but is more about the individuality, personality and uniqueness of  a person. It is synonymous with the word “Ruh” mentioned in the Quran, referring to the divine spark in every human, and as some would say the soul.

What Iqbal was trying to convey was that the Self has to go through disciplined development, and only through this self-affirmation, self-expression and self-development can the human attain true freedom and power.

Iqbal sees God as the most Unique Self, the most Unique Individual. And by developing his own Self, man becomes more unique and more individual, and by this he comes closer to God. Iqbal says:

Physically as well as spiritually man is a self-contained centre, but he is not yet a complete individual. The greater his distance from God, the less his individuality. He who comes nearest to God is the completest person.

With regards to the general principles of Muslim ethics and their relationship with the idea of personality, Iqbal expounds that the Self must pass three stages in its movement towards uniqueness. These are:

For Iqbal, divine vicegerency is the last stage of human development on Earth. He states that the vicegerent is the vicegerent of God on earth, and is the completest Ego, which is the goal of humanity.

So again, the poem is another wake up call for the Muslims to stop their slumber and struggle to develop the Self, which in turn develops the society in which they live, thus by providing true freedom and power.

We would highly recommend the study of the poetry by Allama Iqbal to all people who relish insightful and thought-provoking works. If you have already come across his works we would love to hear from you about your thoughts. As always, we would love to hear from you regardless with your opinions and feedback so please do drop a comment. In turn we finish with another advisory quote of Iqbal:

Given character and healthy imagination, it is possible to reconstruct this world of sin and misery into a veritable paradise.

10 thoughts on “The Poetry by Allama Iqbal”